Finding the best microphones for building a home studio could become a real challenge! I still remember the first time I’ve ever built a home recording studio. I was around 16 and I had a dream of becoming a musician. Man, the audio equipment was so expensive at that time (at least for my budget), so I had to do a lot of improvisation. Time flies and recording studio equipment got cheap, I mean really cheap! New audio interfaces and microphones were released on the market, older premium mics got cheaper, everything was one click away. What’s even better, you can get informed before actually making the purchase. This will ease the process, especially if you are on a tight budget.

If you want to upgrade your recording setup or you want to build your first recording studio, you are in the right place. I am going to recommend a list containing the best microphones you can buy this year. These studio mics are perfect for a home studio or any kind of audio project you can think of (podcasts, Youtube videos). The mics presented here are in no particular order and prices may vary, but one thing is certain: they are affordable and they will bring a great deal of value to your recording setup.

Before starting with the greatest microphones on the market, I want to say that this list does not contains the cheapest mics you can buy. These microphones are affordable, but are not necessarily cheap. When I compiled the list, I had in mind the best ratio between price and quality. When you buy any of these mics you know that you made the best possible acquisition for that price. 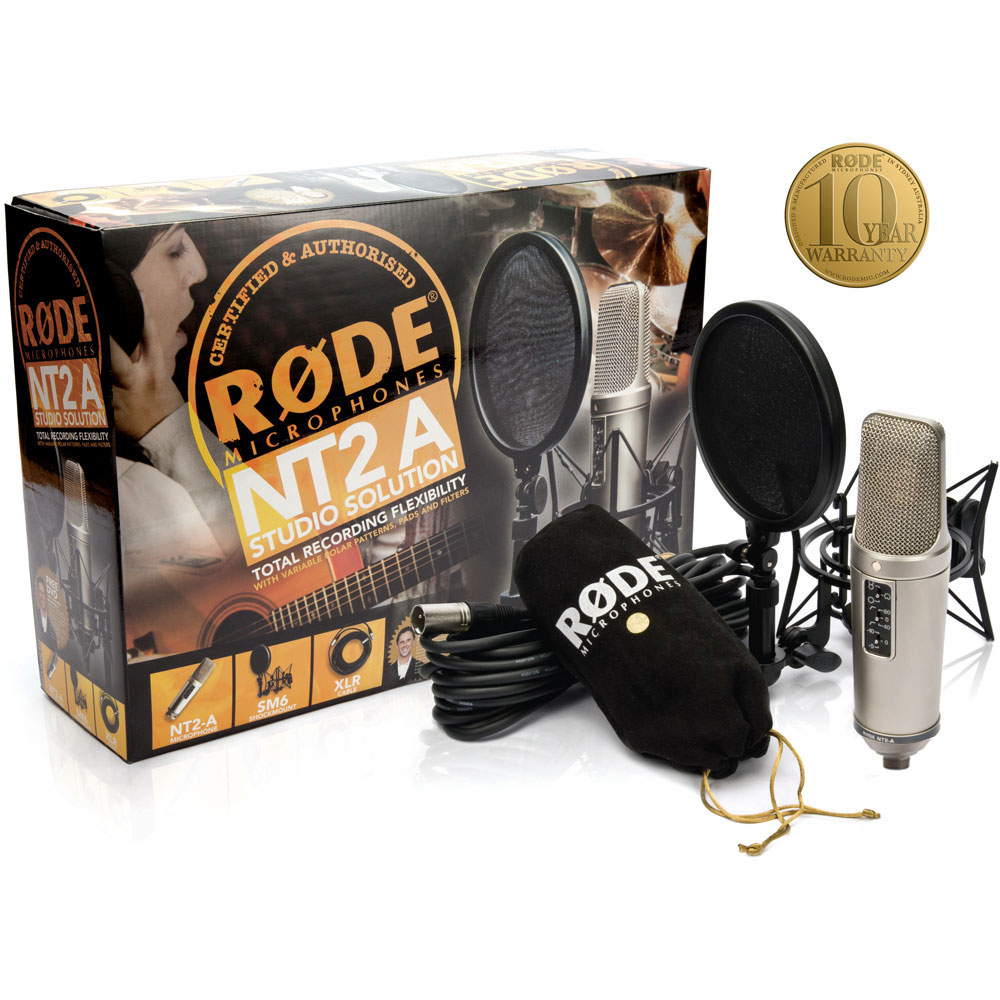 Rode-NT2a
Rode is a condenser microphone that is produced in Australia. This version, the NT2a, falls into the NT2000 line, which was greatly praised by the customers. You will learn that it features a large variety of selectable polar patterns, pads and switches that are incorporated directly into the device.

But, Rode NT2a is more than that, because in no matter what application you will use it for, it will capture the best possible sound. It is perfect for vocals! If you want to record instruments (a guitar) you will be very pleased with the results. NT2a is very quiet when it comes to self noise. You will enjoy the perfect mid-range response, the clear low end and it has a great presence. Rode-NT2a can be found in most online stores priced under $400, which is definitely a bargain.  You can’t buy anything better in that price range – maybe the ACK C214 microphone that’s feature later in our selection. You can check this great recording setup that I love with its older brother, Rode NT1a.

AKG Perception 420
Let me start with this: Perception 420 has the legendary quality of AKG mics, and it is the latest edition of the much praised Perception line of ACK microphones. This mic features a -20dB pad switch and a bass cut filter switch that allows you to record your vocals without those unwanted low frequencies. The frequency response is between 20Hz and 20KHz and 3 positional modes that are switchable: cardioid, omnidirectional and figure 8. It can handle sound pressure levels up to 158dB, which is fairly high. According to some of the reviews, it works great on overheads on drums but also on guitars. You will probably be amazed by how nicely it capture sound details. In the box, you will also find a shock mount and nice case.

This mic is priced under $200. In that price range, it’s the best choice you can make. 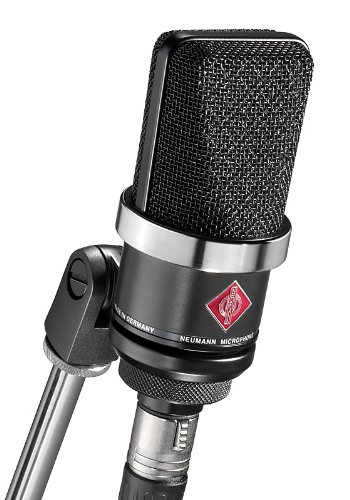 Neumann TLM 102
TLM microphone brings the German engineering and quality into the world of recording studios. Let’s not forget that the legendary Neumann U87 is a trend setter and represents the standard for most recording microphones released today. But U87 is not cheap at all (around $4000), and most of us can’t afford it. That’s why Neumann has decided to build a line of cheaper mics while still trying to maintain the sound quality of U87. The TLM 102 has so many features and it’s hard to talk about all of them in a brief description. The most important feature is the boast of the maximum sound pressure of 144dB, which allows you to record record very loud sound sources like drums and percussion. TLM 102 really shines when it comes to vocal recording. With a frequency response of 20Hz – 20 KHz, it’s clean, quiet, and it captures the real presence of the voice with high accuracy. The maximum SPL is at 144 dB and the impedance is of 50 Ohms. Buying this mic is not cheap, even for a home studio ($699). But if you want quality, you will have to go the extra mile and get this mic.

Besides the microphone, the box contains the mic mount, the mic stand adapter and the documentation. In terms of build quality, TLM 102 feels like a premium microphone. It will absolutely up your game to a whole new level. 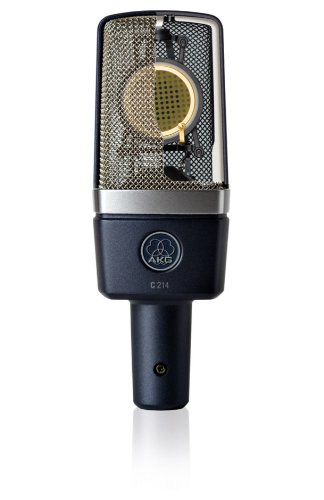 AKG C214
If you have a budget of $400, and if you want a better mic than Perception 420, you should consider ACK C214. ACK manufacturer is building quality mics for over 50 years, and they finally decided to release a line of affordable mics for us, the home studio owners. C214 is the little brother of the well known ACK C414, a mic used by many professional studios out there. The ACK C214 combines the Back-Plate Technology created by ACK with the dual-capsule system found also in C414. I was reading few reviews for this particular microphone, and that combination of technology it’s not just for show, because everyone seems to have only good words about it. The only negative element I could find in the reviews was the low end recordings, and folks say that sometimes they seems thin. But that can depend on the audio interface they are using. 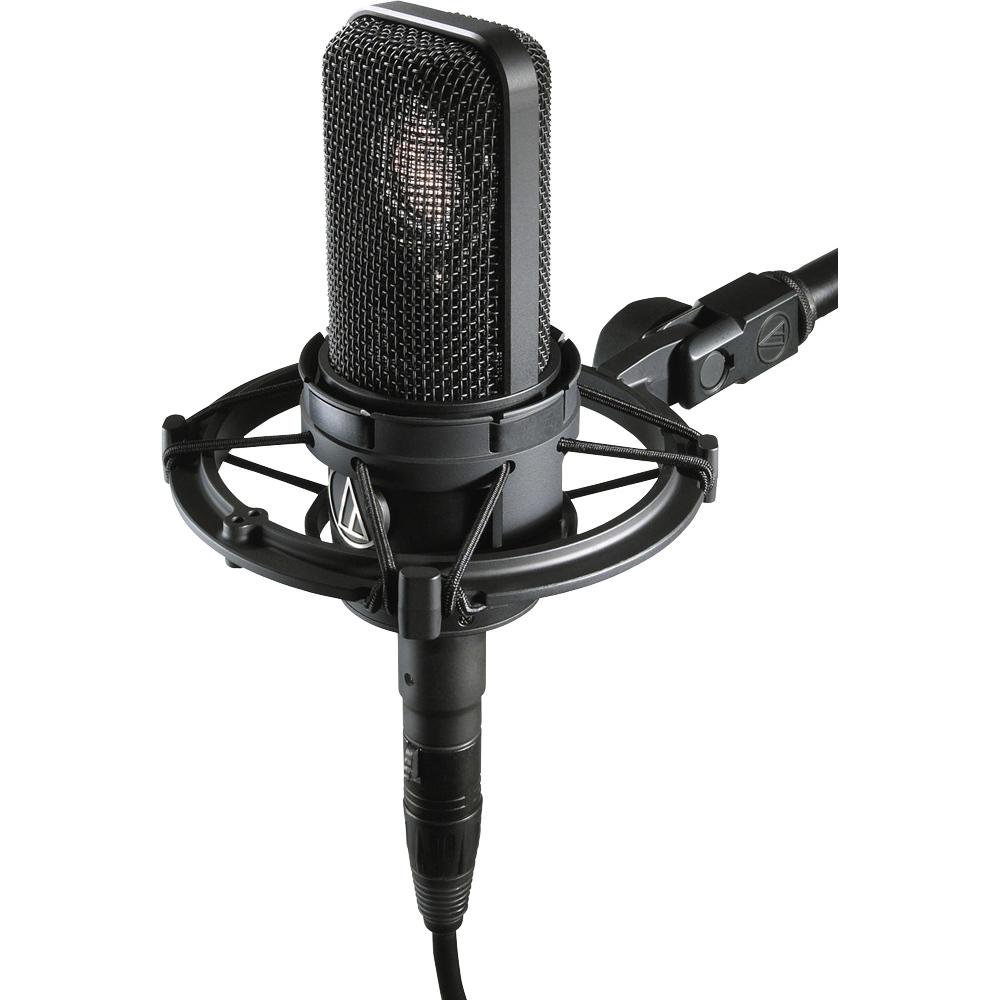 Audio Technica AT4040 Condenser Microphone
Although AT4040 is cheaper than the mics above, it needs to be in this list with the other great microphones of 2017. It was created for professional recording but also works great on live performances. It’s externally-polarized and its large diaphragm captures smooth, natural sounds. Ultra low nose, no low-frequency distortion.

Are you ready to try something different?  MXL V69MEDT is a one-of-a-kind mic since features a vintage tube sound. The grill is plated with 24K gold. If you plan to upgrade from a cheaper mic but you don’t actually have to money to buy a $600 microphone, this is definitely your best best.

If you plan to buy studio equipment for your home studio, you will learn one thing. You are able to get poor quality mics at prices between $75 and $150, or you can spare extra dollars and get something that will really make the difference. For me, investing $400 in a quality mic is nothing compared to the love I have for making music in my own studio.

For many people, it’s not about finding the best microphone for your studio, it’s all about the budget. I understand that perfectly. If you can’t squeeze the budget, you just can’t, and you should get whatever you can afford. Better something than nothing, right? But if you can afford to spend that extra $100 bill, you will have the tool to enter the big league!

Remember that all the condenser mics in this list require a source of power (+48V Phantom Power) and a preamp. You should probably get a recording studio package for it: a XLR cable, a mic stand and a pop filter.

Which microphone is your all time favorite and why? Let us know in the comment section below!