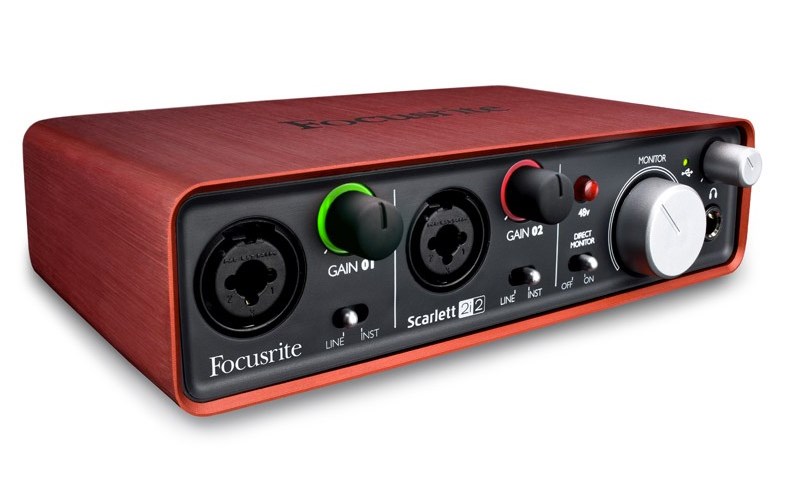 If you read my previous articles on “How to make a home recording studio” you know that I usually recommend Focusrite audio interfaces in most of them. Now, it’s time to see more details about one of the best audio interface for a home studio that’s actually affordable. No, it’s more than affordable, it’s cheap! In this article I will present an extended review on Focusrite Scarlett 2i2 Audio Interface USB 2.0. There so are many pros about this small device, starting with its price, its small dimensions or the input combo feature, but I think its ultimately feature is represented by the two Focusrite microphone pre-amplifiers that brings unparalleled  clean signal path for the condenser microphone, for the guitar or for line-in sources.

The body
The first thing I noticed about Focusrite Scarlett 2i2 Audio Interface is that it is pretty small. In order to understand the actual scale, I’ve compared it with a common CD and I’ve came to the conclusion that the interface has approximately the same length as CD’s diameter. This is definitely an advantage since it means the interface is small, portable and easy to fit into a laptop bag. The overall look of this audio interface is pretty sleek, and the red brush aluminum that forms most of the case looks outstanding.

The front controls and inputs
The controls on the main panel have some weight to them, adding a nice look to the panel. There is no wiggle on the main knobs, but I did find some wiggle on the lower switches for On/Off (no big problem since they are going to be in one position or the other anyway). The important knobs are really smooth and operates perfectly.

The front panel has two mic preamps that take a combo input, so you can either use a XLR microphone cable or a 1/4″ instrument cable. The two inputs adds enough flexibility for an entry-level recording setup. What’s nice about the XLR input is that it automatically detects the mic and it puts it the mic level signal. On the 1/4″ instrument cable, you have to select which signal strength you are going to be inputting.

On the front panel also features the 48V+ switch that enables the Phantom Power that is required to power the condenser microphones. The last two controls (knobs) are the main sound control (the big knob) and the monitor control (the upper-right knob). Finally, the front panel features control lights for USB connection and lights for every entry (they will go red when the sound clips).

The back panel
The back panel of Focusrite Scarlett 2i2 Audio Interface is rather simple, featuring only the USB 2.0 port and the Line-Out outputs left and rights for your studio monitors.

Functionality
I’m going to start by talking about the instrument level function of this audio interface which amazed most of the users, because it contains the line level and instrument level selector. Another cool function of this audio interface is the direct monitoring feature that allows you to listen to your recording without latency (and without effects).
After I have connected all the inputs, I took the interface for a short recording ride to see what it’s all about. As expected from any Focusrite interface it worked flawlessly, the recording quality is fantastic (considering its price range). I was able to use two guitars at once thanks to the combo feature, and it recorded without problems. The output was clear, and the sound quality was comparable to my other interface, the Audio Kontrol 1. One last thing. The Focusrite produces the best preamps in the music recording industry, and the Scarlett 2i2 Audio Interface preamps make no exception: they are the same preamps used on Saffire PRO 40 and Liquid Saffire 56. The maximum sample rate supported by this audio interface is 96kHz and the maximum bit depth is 24-bit.

This audio interface is compatible with Windows 7 32/64 and with Macs and it is Pro Tools ready.

The Price
The Focusrite Scarlett 2i2 Audio Interface can be bought at reasonable price from most online stores for $129
Conclusion
After using the audio interface for few days and getting to know every feature, getting to set the correct levels for my condenser microphone, I came to the conclusion that this affordable audio interface should definitely be the first option for the “bedroom musician” who wants to build a recording setup on a low budget. In the box you will find the Ableton Live Lite 8 Software and the Focusrite’s Scarlett plug-in suite (reverb, eq, compressor and gate). With other words, for just $129 you will get a complete studio core in the box.