The best USB microphones around $100 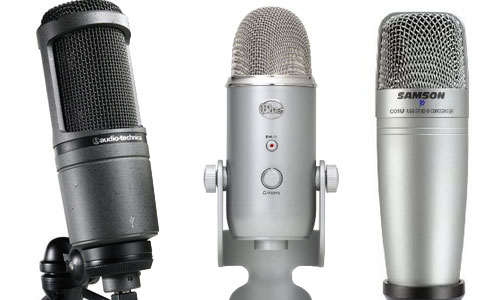 The best USB microphones around $100

If you plan to record your own songs at home but you don’t want to spend a large budget for the recording setup, buying an USB condenser microphone is a good idea. Nothing fancy, no preamp, no audio interface. Just a good microphone and a USB cable. There are many options to choose from here. Brands like Audio Technica, Nady, Blue, Samson, MXL, CAD will try to capture your attention with USB mics between $30 and $300. You will learn that most USB microphones are around $100, but you will also find a few that are way above that line. In this article, I will try tho choose the best USB microphones that you can buy around the price of $100. The prices of these USB microphones were updated in January 2022. They may vary, depending on the moment you read this article.

Blue Microphones Yeti USB Microphone – Price: $99
Judging from Amazon’s reviews, this is the best USB microphone around $100. I’m not saying it’s my favorite, because it’s not. But 737 reviewers agreed that Yeti USB deserves 4.5 of 5 stars so it has to be a smart choice. The mic features a 3 condenser capsules that allow it to record in any situation. Compared to other mics in the list, it features a multiple pattern selection (cardioid, bidirectional, omnidirectional & stereo), gain control, mute button and 0-latency for the headphone outputs. Most reviewers said that if you plan to buy a good USB microphone for your studio, choosing this mic is a no-brainer. So, with all these things in mind, I will place Blue Microphones Yeti USB Microphone on top of my list. You should definitely check it out

Audio-Technica AT2020 USB+ Condenser USB Microphone – Price: $120
As I said, the first mic in this list was not my all time favorite. Don’t get me wrong, Yeti is a great mic, but I can’t chose it over AT2020. I guess it’s a personal decision, since I’ve used this mic in so many projects successfully. It’s impossible to think that another USB mic is better than it. On Amazon, 271 reviewers thought that this mic deserves as well a rating of 4.5 of 5 stars. What’s cool about AT2020 USB version? It captures clear and natural sounds, it features a cardioid polar pattern that isolates the source and it has a low self noise. According to reviewers, the mic is the perfect choice for podcasting, home recording studio, voice-over projects.

Samson C01 PRO Studio USB Mic – Price:$99
I will be honest. I have not tried this USB microphone, but 184 reviewers gave this mic a 4 of 5 stars so it has to be great. Compared to the other two mics in the list, it is cheaper (under $100). As I was going through the reviews, I concluded that the mic is more suited for podcasting rather than recording vocals for a song. There seems to be a low self noise coming from it when you record, but I’m sure you can use a “gate” VST or something like that to remove it. I have worked with poor non-USB microphones before, and after adding few effects the voice stood perfect in the mix. Samson C01 is the first USB studio condenser mic created, and it’s discovered directly by the computer, no drivers needed. It features a cardioid pickup pattern, large 19mm diaphragm and heavy gauge mesh grill.

Conclusion
If you plan to record music at home on a ultra-low budget, there are at least 3 options you can choose from in order to get great results. Even if you don’t buy one of these mics, make sure to read all the reviews before making the purchase. An expensive USB mic is not necessarily a great mic, just as a cheap mic is not necessarily a bad mic.

PS. remember that any condenser mic requires a pop filter and a mic stand.

One Comments “The best USB microphones around $100”