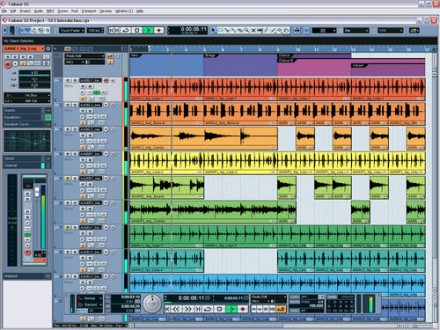 13 years ago, when I first got into music, the Internet was not packed with tutorials and advices on how to create your own home recording studio, how to make an instrumental, how to record music, how to mix and master a song. Living in a small city made it impossible for me to achieve the right quality for my music. The lack of information almost broke my wings and the first couple of years of me entering the music world represented the dark age of my small “carrier”. It took some time before I got my hands on a decent music software. Those where the days when I was using the N-Track Studio to record my vocals on an instrumental created on a common keyboard. As I said, totally unprofessional.

Now, things have changed, information is one click away and there are so many music stores online where you can find just enough reviews to help you decide on the right piece of equipment for a home recording project. But what about music software? I’ve gathered here a collection with 10 of the best music programs you can use to make and record music at home, in your own environment.

1. Steinberg Cubase
Cubase is used by me and some of my friends because it’s cheaper and it’s compatible with most audio interfaces today. It’s usually used on Windows platforms, it’s great for making instrumentals but more suited for recording vocals and mixing the songs. I like it over any other music app because it’s simple to use, it has great support for VST and I’ve been using it since the first version (I know, I’m biased).

2. Apple Logic
This music software works on Mac computers and it’s considered to be the most advanced audio editing program today. If you are used to previous app ( Cubase) you will find Logic to be pretty difficult. But once you will get to know it, you will see the difference (at least that’s what they say).

3. Cakewalk Sonar
As far as I know, this music app is perfect for movies if you want to create a surround audio experience. So why is it in this top? Because besides its video purpose, it’s perfect capable of handling audio files, letting musicians master every element in their music production process. You should check its latest version, Sonar X2.

4. Adobe Audition
This is the new version of CoolEdit, because in 2003 the company was bought by Adobe and they’ve changed the name to Audition. The app is mostly a multitrack mixer and a sound editor resembling SoundForge. It allows you to repair and enhance audio files, to edit audio files with amazing precision, to see the spectral frequency of your audio files.

5. Sony Sound Forge
This music software is a classic for PC users, because it is used for a long time by amateurs and pros alike. Sound Forge is a complex audio editor that features every possible function you can think of in order to manipulate your audio file the way you want/need. Among its effects you will find the volume, normalizer, pitch shift/bend, silenc, EQ, delays, reverb and compression. Recently, they have released a Mac version called Sound Forge Pro MAC (professional digital audio editor). It works great for editing the audio source from video files.

6. Ableton Live
This music app is mostly used by DJs in live performances because it allows you to manipulate pre-existent musical structures (loops or sounds) easily. In order to get a full live experience from Ableton Live you need to use it along with other MIDI controllers like Traktor, Neumark, Faderfox or Stanton.

7. Steinberg Nuendo
In order to describe this program in few words, I will say that it is an “expensive version of Cubase”. According to Steinberg, Nuendo is specially created for audio post-production in videos and movies. It allows you to mix audio files in 10.2 format and it can handle video files (as expected). If you are considering buying a software just for music and you have no intention going into movie business, you should choose Cubase.

8. FL Studio
This is probably the main music software used by music hobbyists all over the world due to its ease of use, its intuitive interface and its features. The early years of FL Studio where all about making music using loops and rhythm, but the latest version of the app converted FL Studio into a complete mobile recording studio: sample, MIDI, musical structures, internal and external effects, routing. It’s compatible with Windows, and I’ve also tried a mobile version for it that’s minimal but it works great!

9. Propellerhead Reason
I love reason but I have to place it on the 9th place because it does not offer a complete solution for home recording projects. It’s the most powerful for creating instrumentals tool I’ve encountered so far, but it has zero features for recording vocals. Although many voices will claim that Reason is mainly used in electronic music projects, I’ve used Reason in creating pop music, hip-hop music and even acoustic soundtracks for movies. Once you get to know it, you can make wonders with it.

10. Sony Acid
This app is great for beginners but I don’t necessarily recommend it for mid-level artists. The multitrack editor works decent if you plan to create an instrumental or record vocals using multiple tracks but there are better solutions (see above). Acid allows you to mix everything in an old-fashion manner, nothing fancy. I remember that I’ve used it in my early days and it was pretty simple to use, but it didn’t featured as many options and effects as its competitors. Even “N-Track” seemed better than it.

Bonus: Audacity
There is nothing as good as free software. That’s why I’m adding a last gem to the list of the best music software for home music studios. Of course, Audacity is not that complex as other apps in this list. It is small and does not feature premium effects, but it has just enough to keep you going. This free music software allows you to record using multiple tracks, it has a bunch of built-in effects like echo, stretch, phaser, reverb, reverse, silence, wahwah. If these are not enough for you, you should know that Audacity has support for VST plugins and it also features few audio analysis functions. Even if you have a premium software, you should give Audacity a try just for fun.

This is my list with ten of the best music apps of 2013. If you want to see more details on a specific app, click any image in the title. What’s your favorite music software for recording music?