Cubase 5 – Getting started, configuration, settings, how to record songs

Cubase 5 – Getting started, configuration, settings, how to record songs

In this tutorial, I am going to share some of the things I’ve learned over the years that may get you started with your recording sessions in Cubase. I am going to focus mainly on the preparation process, general settings, inputs and VST settings in Cubase 5. The following pieces of advice may very well work on any upper versions of Cubase like Cubase PRO 8.5, but I have tested them only on Cubase 5, since that’s the version I own right now. Let’s get started:

Before getting lost in the following configurations, make sure that your audio interface is connected to your computer and it is installed properly. You can verify this by listening to a Youtube song or playing any type of audio file from your local disk.

When you start Cubase for the first time, you should choose New Project in the pop-up window or from the File > New Project option. A new pop-up should appear, asking you to choose the type of template you are going to use. Choose “Empty” and then press OK button. Next, you are asked to choose the working folder, the folder that will contain all the recordings you make for this particular project. I like to be organized, so I keep a separate folder for each song, so things won’t get to mixed up in the process. In the end, your screen should like just like in the image above. 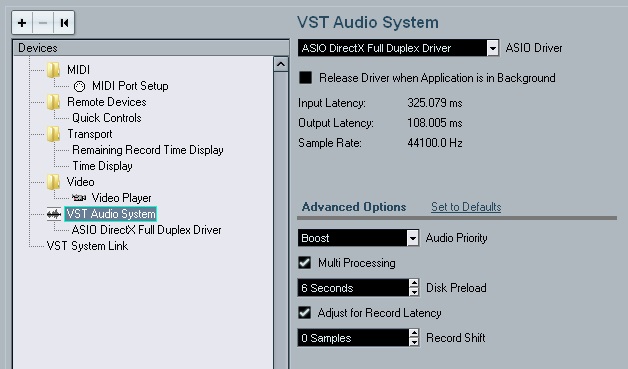 2. Setting the Audio Interface in Cubase 5

3. VST Settings for microphone in Cubase

By default, Cubase 5 allows you to record using a stereo input. In other words, you will get the left and the right source on the same channel (if you are planning to record on a stereo channel). But there might be a problem, since most microphones are mono, so you will be getting signal only from left or right, the channel containing only the self noise that’s coming the recording chain. In this case, you should make some changes in the VST connection settings in order to capture only the channel that’s active.

Press F4 or select Main Menu > Devices > VST Connections. Choose the “Inputs” tab, and select 2xMono from the Presets drop down. If there is no such options there, you have to do it manually: delete everything in the BusName table and Press Add Bus twice in order to add two Mono Inputs. Make sure each Bus Name has both Left and Right as device port settings. Now, you should have two mono inputs set, one for the left and one for the right channel. Close this window and return to the main window. 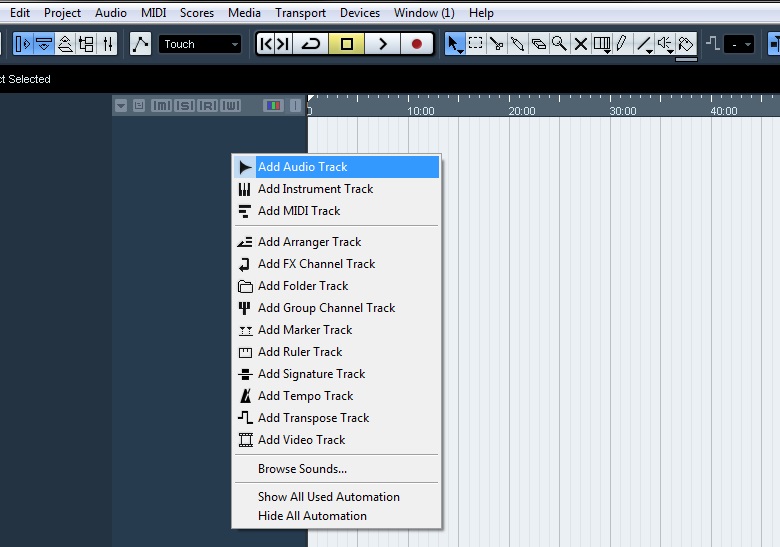 4. Adding a new channel in Cubase

In order to add a new audio channel to your project, select Main Menu > Project > Add Track > Audio. A new pop-up should appear, allowing you to choose the type of audio channel you are going to create. Create a new Stereo channel by pressing OK. Alternatively, you can do this by right cliking in the bluish vertical area, just like in the image above. 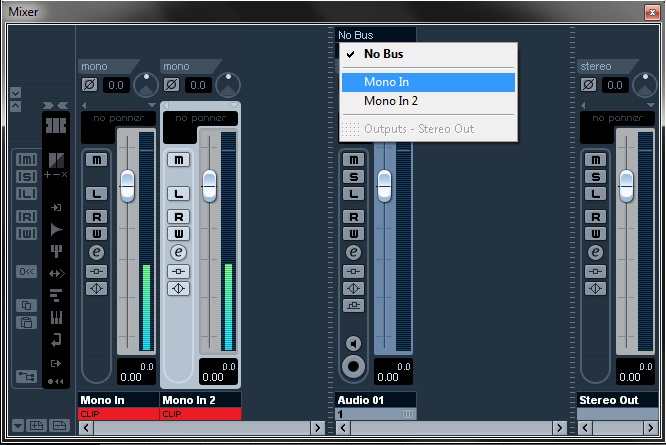 5. Setting the microphone as mono input in Cubase

Open the mixer window by pressing F3 or by clicking on the small mixer button under the main menu. There, you should see the mix-volume for your newly created audio channel and the mono1 (Audio 01 in the image above), Mono1 and Mono 2 input channels (Mono In and Mono In 2 in the image above). In the upper area of Audio 01, just above “Stereo Out” lies the input settings for the Audio channel you have created. See which mono inputs has an active signal and select it as the the source for your audio channel. In my example above, I have set MonoIn as the recording source. Close the mixer window, make sure the recording is enabled on this channel and press record. If everything works smoothly, you should be able to record your voice on the audio channel you’ve just created. If there is no sound on the recording, you should probably choose the other Mono input.