Rode is one of my favorite microphone manufacturer and if anyone asks me for a home studio microphone recommendation, I will gladly reply with one of Rode’s mics. Although the NTK mic was listed as a thousand dollar mic, this celebrated large-diaphragm valve mic can be found at half that price on various online stores. But we’ll get into that later. This home recording item brings exquisite sound quality while maintaining the classic design and technology that made the Australian company famous in the first place. The main feature of this mic is probably the HF-2 capsule designed and manufactured by Rode with care and special attention to its performances. 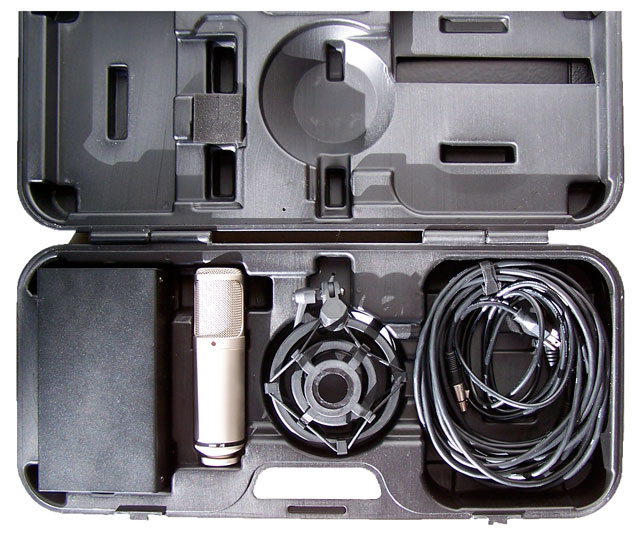 As you may remember, I was not pleased with the way Rode NT1-A is delivered because there was no hard case for the mic, only a cheap pouch. For Rode NTK, they decided to deliver the microphone in a solid black plastic case. There’s still no hard case, but there is an improvement here. The box contains the microphone itself, the power supply for the microphone (with a voltage switch), a Rode cable to connect to mic to the power supply, a conventional mount for the mic (that features an adapter), a sticker, the warranty and a short manual. Compared to other mics, the plastic case is really useful for carrying the mic around, because every item fits perfectly in it. The microphone comes with a power supply that features a power switch, so it’s compatible with most electric voltages around the globe. The cable is specially made for this mic and it has great quality.

The body is made of a metal material that is machined with care, allowing a facile way to access to the tube compartment. Although the NTK microphone may look like to other established recording studio microphones, it does not attempt to straightaway emulate any particular model on the market. The grill is dual layered and it is pretty effective to reduce plosives and pops. It has a classic body, confirmed by the nickel polish and the gold-plated stud. There is no low-frequency switch.

Although Rode was one of the first microphone manufacturers that created an affordable capacitor microphones, there is no cut back on the quality of Rode NTK cardioid valve mic. The classic of mechanistic and electric technology used for this mic is imposingly eminent, while the Class A parts that make NTK are of superior caliber and are inter-connected on a vigorous optical fibre card. The 6922 twin-triode valve used for it was hand-selected and graded by folks at Rode.

The performances of RODE NTK confirms that it is a serious choice that should be taken into consideration for anyone who attempts to make a home recording studio. Sounds recorded through this mic are warm, smooth and detailed, and you will notice the high-quality of the recording as soon as you speak into it. Even the elusive spoken articulations are picked up by this mic, and although the tube circuitry does appear to bring a slenderly epic sound, its essence is nicely downplayed in so much that the final outcome sounds utterly innate and perfect. The lack of low-frequency switch means that you will have to use post eq on the recordings if you plan to record vocals.

The RODE NTK tube condenser microphone can be found around $550 on Amazon and MusicianFriend.

Although Rode NTK is not the cheapest microphone on the market, its performances and features will definitely worth your money. If you plan to make a solid investment in the first piece of the recording chain, NTK should be taken into consideration. They say that Nickelback’s Long Road was recording with this mic, so if you want an actual demo you can listen to their album on Youtube.