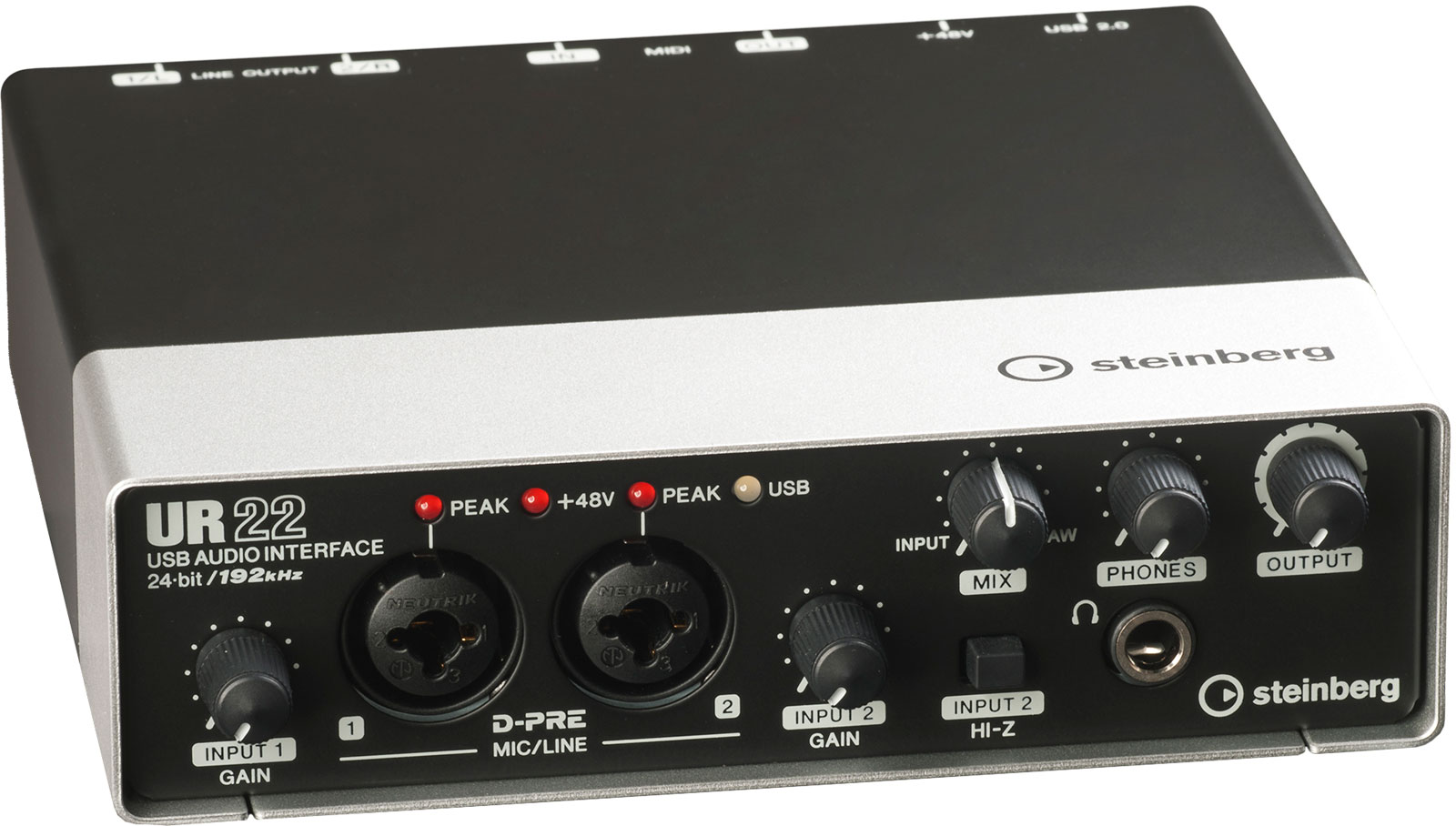 The body
Before talking about the body, I want to talk about the box. The Steinberg UR22 USB’s box contains drivers disk, a voucher for Cubase AI 6, the manual, the cable and the audio interface. The UR22 has a heavy body (1 kg, 2 lb. 3.4 oz.) created from full metal chassis. When you hold this audio interface in your hands you have that feeling that its build to last.

The front controls and inputs
Just as the interface’s case, the 5 rotary knobs present on the front panel are created from durable plastic and they gave you the same feeling as the body: they are really durable and balanced. The front panel has a combo of Neutrik Combo A Series hybrid inputs (XLR/TRS/TS) that are controlled from the two gain controls. There is a button that will switch the Input 2 to Hi-Z if you plan to use it for basses or guitars. There are peak lights for each inputs and the +48V phantom power works on both inputs at the same time. On the front panel you will also find 3 additional rotary knobs that allow you to control the input/DAW, the headphones level and the output level. As expected, the headphone jack is found on the same front panel.

The back panel
On the back panel of the Steinberg UR22 USB Audio Interface we find the USB 2.0 port that “fuels” the device, the Phantom Power switch, the Line Output connectors and the MIDI connectors.

Functionality
I’ve tested this audio interface only with Cubase and I will say that it works flawlessly. The interface acts perfectly on projects with 44.1khz sample rate and a buffer size of 64 samples. The input latency for these settings is under 4ms. I like the fact that it features the direct DAW monitor mods which allows you to hear the inputs directly without any kind of latency (or effects). Steinberg UR22 features 2 D-PRE Class-A microphone preamps created by Yamaha with an unique number of transistors (four), allowing the audio interface to record hot signals without adding distortion to it. Although there are many opinions on the D-PRE preamps, most users will agree that they provide great quality sounds even with a boost of gain.

The Price
As I said in the beginning of the review, this audio interface is for entry-level setups. You will find it on most music websites for $149 (new), or $129 (refurbished).

Conclusion
Before testing this audio interface I really believed that you will not find a better interface than Focusrite Scarlett 2i2 under $150. Seeing all the features presented on Steinberg UR22 USB, testing the preamps and the recording capabilities, I understood why it took Steinberg so much time to enter the hardware market: they wanted to create great products. This interface stands out from the crowd with its sturdy design, the 192 kHz sample-rate, and the almost-perfect D-PRE mic preamps.