Yamaha has been building audio products for some time, and their Yamaha Studio Monitors are actually praised by a lot of musicians. This audio interface powered by USB has been designed with care (at least according to the manufacturer) and it actually packs surprising features. It should make your job on building a home recording studio easier, since it’s easy to install and easy to use. Although it looks like a mixer, it has the same common functions of a normal external audio interface found at the same price. But we’ll get into that later. For now, let’s talk about …

The body
Most users love the fact that this audio interface looks like a mixer. I’m not necessarily a big fan of this design, but I will admit that the body is light weighted, sleek and solid. I got my hands on a white model, and as far as I know, this is the only available color. 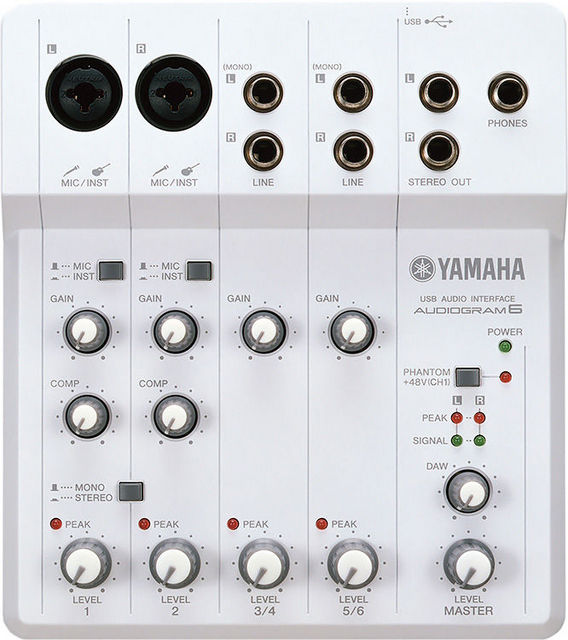 The controls, inputs, outputs
Once you take a quick look at the control area, you will learn that the device has knobs that control the preamps, the compression and the input level. You will also find a DAW control know and a master level. Just like most audio interfaces today, this Yamaha device has 2 microphone / Hi-Z inputs and additional 2 more stereo line-in inputs. The control panel has 4 buttons: two for switching between a microphone and an instrument, a mono/stereo switch and a Phantom Power switch for condenser mics. Every input has a red peak LED that will notify you when the audio levels are getting too high. There is also a stereo output and a headphone output.

The back panel
There is no actual back panel for this audio interface. You will find there just the USB cable slot that connects the device to the computer. 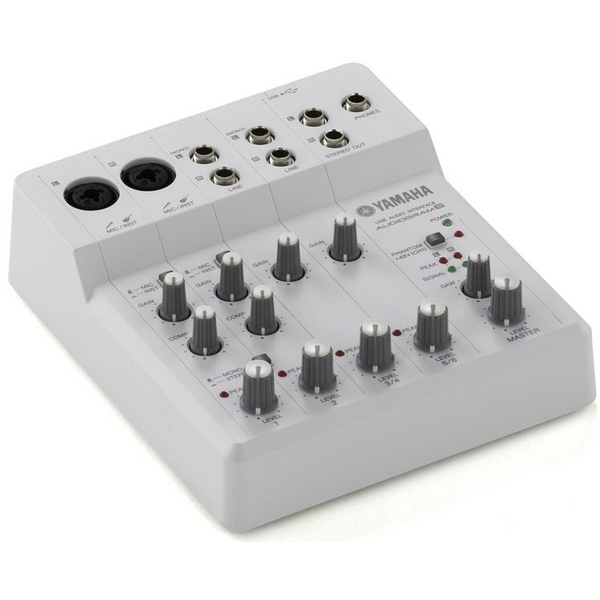 Features and functionality
This is probably one of the audio interfaces that I would recommend for entry-levels musicians and folks involved in audio podcasting. One of the features that got my attention was the hardware compression. The other audio interfaces in this price range lack this feature, and it is one of the reasons you could think of getting this interface. Even so, having a single knob for compression seems too simplistic to be real, since audio compression is more than switching something to on/off. The preamps are ok, but I didn’t notice something spectacular in that regard. I noticed some pops and clicks when recording the vocals on multiple channels and I guess that working with USB 1.1 technology (12 Mbit/s) is one of the reasons for this issue. Yamaha should upgrade this interface to USB 2.0 (480 Mbit/s) technology. But again, if you’re using it for simple projects or for podcasts, this interface is great! I was curios about its compatibility with electric guitars, synthesizers and drums, so I scouted for some user reviews. No complaints there, as long as the projects were not getting too complex. There is no MIDI I/O on board and the maximum sample rate is 48 kHz @ 16-bit.

The Price
The Yamaha Audiogram 6 can be found on most shopping websites at prices between $130 and $200. For instance, you should look for it on Amazon.com for $129.

Conclusion
This entry range audio interface is not for the audiophiles. It’s based on an obsolete technology (USB 1.1), it has a feature that seems to be there just for marketing purposes (the compression) and it lacks the MIDI I/O. The package also includes the Cubase AI recording software which is not enough for make me place this device in a positive light. At this price, you can consider a better interface, like Focusrite Safirre 2i2.